Today, the high in Seattle hit 92°F. It’s very hot in my apartment, I feel like a normal distribution with an increasing standard deviation…

Animated normal distribution with a changing standard deviation. Made with matplotlib and imageMagick.

Before entering the Data Science Intensive Program at Galvanize, I reached out to current and previous cohort members to see if they had any thoughts or advice for someone thinking to enter. Nearly every person came back with a glowing review and the same analogy:

They weren’t joking. There is so much information being thrown at us at one time that it is physically impossible to absorb it all. The best you can do is take good notes and try to take in as much as you can.

In this week we covered an incredible amount of material. We covered (no joke) about a year’s worth of lectures on probability, statistics (frequentist and bayesian), A/B testing, hypothesis testing, and bootstrapping all in one week. Because of memorial day, all of that was crammed into four days. Needless to say, I’m exhausted, but satisfied.

Each day’s lectures were complimented with programming exercises illustrating the topics of the day. For the A/B testing exercise for example, we used data from Etsy to determine if changing their homepage would drive additional customer conversion. For the Bayesian lecture, we developed and performed simulations for coin flips and die rolls to illustrate the concepts behind Bayesian probability. This topic was somewhat mind-blowing to me, as Bayesian probability is a way of thinking about statistics which is totally different and foreign to the ways that most people (including myself) are taught.

This was also the second week of pair-programming and I’m finding I like it more and more.  Pair-programming is when one person “drives” while the other person “worries”. You switch off every 30 minutes or so. The brilliance of pair-programming is that, in addition to learning to work with other people, by the end of the day, we are often very tired and having a partner helps. Working in groups makes you answerable to your partner. Your mutual success depends on both of you working hard to get the assignment done. We switch partners daily, so each day has a different dynamic. Sometimes I’m the stronger programmer, sometimes I’m not. I’ve found it’s a nice way of humbling oneself.

Wow, what a week!

If I thought the first week was tough, I was wrong. I haven’t worked this hard in a long time. It’s incredibly exciting though to be working and learning in a place like Galvanize. My fellow classmates come from all walks of life: structural engineers, web developers, business analysts, even a snowboarding instructor. The week started off with a two-hour assessment on Python, Numpy, Pandas (not the bear), SQL, Calculus, Linear Algebra, Probability, and Statistics. I’m very glad that I took Week 0 because I know for a fact that if I hadn’t, the test would have been much harder. This test will serve as a baseline for our progress going through the program.

After the initial assessment, we went through all the nitty-gritty, boiler-plate at Galvanize. We got our keys, wifi setups, learned the rules. Turns out that after the program ends in August, I get 6-months of access to all the facilities that Galvanize has: conference rooms, desks, the roof deck, social events, networking, etc. That’s an awesome bonus I was unaware of.

Going forward, the schedule more or less follows the table below.

EDIT: The reality seems to be that I leave Galvanize around 6pm or later.

We covered far too much information this week in lectures to go over on this blog, but here are the highlights.

One of the biggest focuses of this week has been getting familiar with Git and Github.  These two tools are fast becoming the industry-standards for version control. They allow scientists, engineers, hobbyists and the like to coordinate projects from all over the world without writing over each other’s changes. In addition, if you were to say, write a line of code that breaks everything, git contains a history of what’s called “commits”. You can revert to previous commits and get back to your working version. Git, is the program which runs version control. Github, is an online service similar to dropbox that allows you to host and collaborate with others. Here’s a link to mine. There isn’t much there yet but it will be filling up fast.

SQL (it’s just a puzzle to get stuff)

In the era of big data, sometimes the biggest problem is just accessing the information you need and leaving the rest behind. SQL (Structured-Query-Language) is a language used by many industries to access their data. Here’s a little example. Let’s say, I have a database called “my_table” and it contains a “favorite_cheese” column.

This query would return a table of every row in the table ‘my_table’ where the ‘favorite_cheese’ column was equal to ‘camembert’. Seems simple enough but by being creative you can perform incredibly complex operations to access results which are just what you are looking for.

We also covered Bash, Object-Oriented Programming, Pandas, AWS and more but I’ll try to address those in future posts. The one thing I will mention is that if you type

The week ended with a happy hour hosted specifically for Galvanize’s Data Science students past and present. We were able to meet students from the previous cohort and learn about their experiences during and after Galvanize. We’ve got a great group and I’m happy to be learning and working with these people.

Next Week: In Week 2, the focus will be on statistics and probability. Stay tuned! 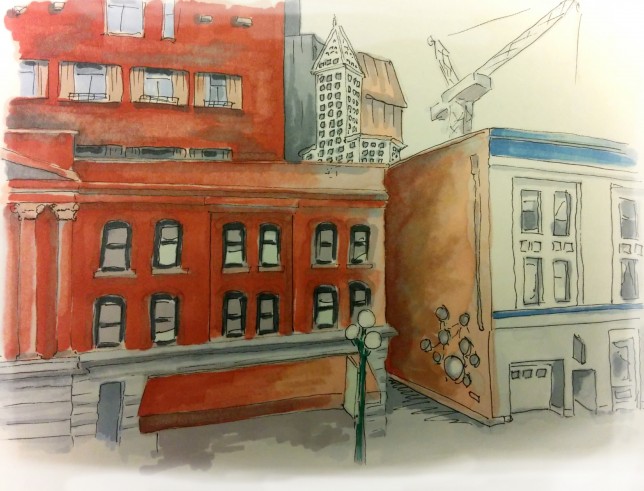 View of pioneer square from Galvanize’s headquarters in Downtown Seattle.

In the data science program at Galvanize, you sign up for a 13 week, intensive course in Python, machine learning, statistics and more. It is meant to be a highly efficient means of transitioning into the data science and analytics field; a transition I’ve been excited to make for some time now.

It turns out that Galvanize offers a Week 0, voluntary week, specifically focused on getting the members of the cohort up to snuff when it comes to python programming and linear algebra.

As I knew, going into the program, Galvanize was going to be an intense academic challenge. Already on Day 1 of week 0, I was having to work quite hard, thinking back to my undergraduate days when I worked with vector spaces and matrix algebra. Luckily, nothing was too taxing as of yet.

I’ve been enjoying playing around with the atom text editor which is a very powerful and flexible way of writing in many different languages. In fact, I’m writing this entry using markdown right now. One of my favorite things about it is the fact that I can use LaTeX math notation right in the editor meaning I can write out complex equations, arrays and the like quite easily using the text editor interface.

The location and setting of Galvanize are both quite awesome. It is located in the heart of Seattle’s Pioneer Square in an renovated brick building (which apparently used to be NBBJ’s headquarters). Housed in the building, in addition to the Galvanize’s education programs are many startups, making the atmosphere  busy and exciting. Because this week is voluntary, only part of my future cohort is here, but so far everyone, including the teachers seem very intelligent, motivated, and friendly.

I’m excited for the next 14-ish weeks of my life and the challenges and opportunities that this fellowship will bring me. My plan is to write a blog entry for each week of the program so people can track my progress, and see what a programming bootcamp is really like.

Analyzing the relationship between retail pot sales and call-center data

For years, the criminalization of Marijuana sale and usage has made data collection and research on the topic difficult to perform. In Washington state, Recreational Marijuana went on sale in local dispensaries starting mid-2014. The question of whether or not the opening of a dispensary produces a spike in the amount and type of Marijuana use is a valid question for legislators, administrators, doctors and more.

As an exploratory exercise, I created the following map using call-center data gathered by the Washington State Poison Center on marijuana use and data scraped from the web on the location and opening date of retail marijuana shops in Washington State. Data ranges from January 2014 to August 2015. Both calls and shops are localized by zip code. By scrolling through we can see where and when shops and cases cropped up.

“Cases” are any calls that went to the Washington Poison Center related to Marijuana usage. This could be anything from “My child got into my weed cookies” to a doctor calling to consult on someone who ingested too much Marijuana. 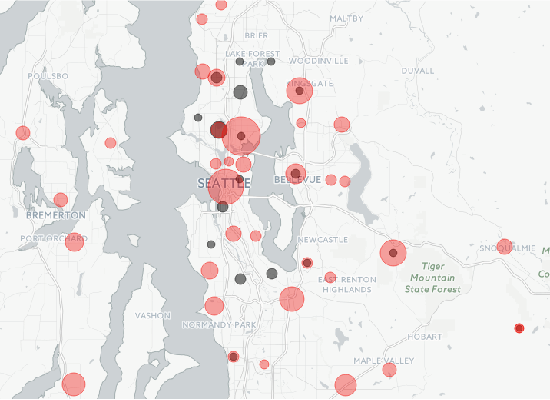 In this period of time there were only a few hundred cases. This was enough however to see some trends in the data. The highest number of cases occurred in the U District and in Pioneer Square.

Please note that currently only shops in KING COUNTY are shown.

This map was created using R, Leaflet, and Shiny.